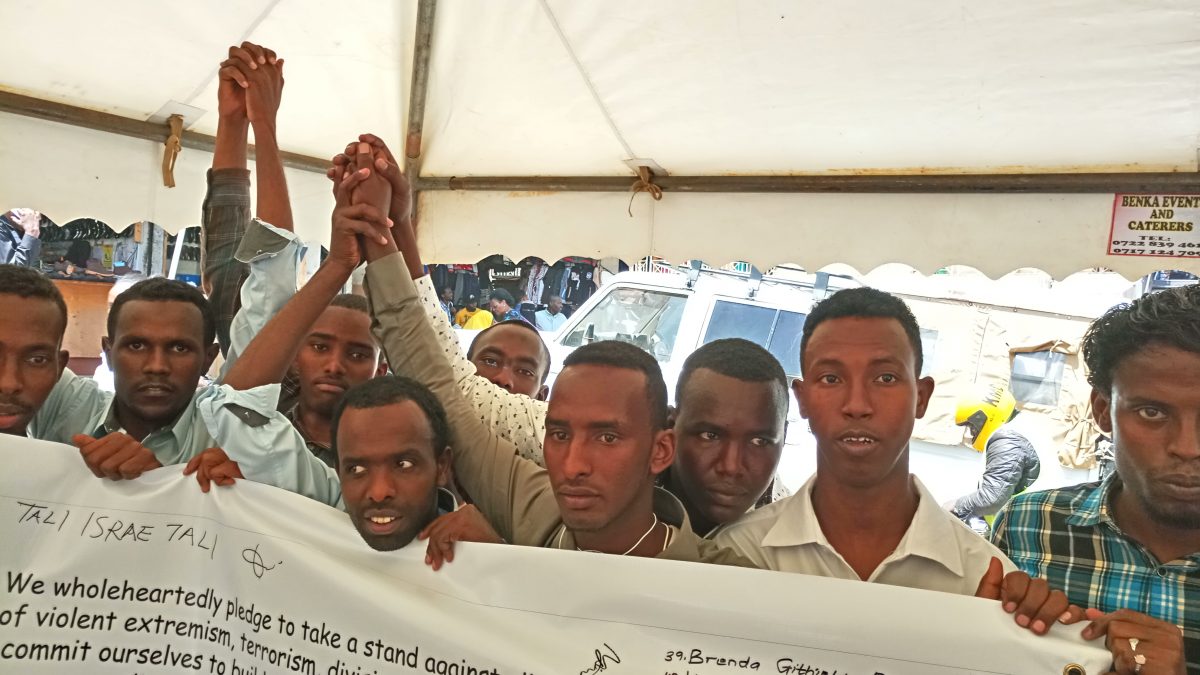 In these times of insecurity in Kenya a possible scapegoat is easy to point fingers to. Yet, issues are more complicated and complex. How can some youngsters become attracted to radical groups in the society, seemingly so easily? What is the background of such mainly young men? What can be said of the human rights situation in this regard? And, what can we do as students, religious leaders, women leaders, youths, scholars, activist, journalists and (political) leaders of this country?

“Curbing the negative perception against Refugees and Migrants in Kenya”

In the context of the ongoing security operation dubbed Operation Usalama Watch human rights issue seem to be at high stake. The human rights of life and freedom from fear, of Kenyan citizens in a context of blasts on attacks on Matatus, Shopping malls and Religious buildings seems to be compromised. The Kenyan authorities see themselves compelled to protect these citizens’ rights. Yet, in order to do so, it seems that basic rights of some individual and communities at large are at risk. Especially the Somali refugee community, according to human rights and legal aid organisations, are facing basic violations of their human rights such as the right of a fair trial. Other political, socio-economic rights seem to be compromised as well.

“Curbing religious intolerance and the negative use of religions in Kenya”

Following two decades of dramatic progress in economic development, political stability, improved governance and inspired regional cooperation – currently, Africa is at a turning point. Stability and economic well-being is being threatened by a number of emerging security crises, in particular the recent upsurge of violent conflict, together with its ‘religious’ justification, rogue character and cross-border spill-overs in many countries. The threat is compounded by its impacting a number of the pivotal states on the Continent, including Nigeria, Egypt, Kenya and Libya, thus threatening to turn some of the major pillars of continental stability architecture into liabilities. It is imperative that the nature of the threat be accurately diagnosed in a timely manner, and dealt with in a measured way without a counterproductive overreaction. The spread of violence reflects multiple failures in African state and society, including failure of the state in securing the loyalty of all its citizens, compounded (and often caused) by the failure of political and intellectual elites to provide inclusive political and moral leadership. No less important is the failure of religious leaders, institutions and movements to provide credible spiritual and moral leadership that could channel religious commitment into constructive channels. The sectarian diversion of religious sentiment into violence or the search for short term gains for partisan actors is, fundamentally, a crisis of religion and religious leadership.

Religion figures prominently in the narratives framing the more destructive conflicts currently plaguing the continent, in particular in Somalia, Nigeria, Mali, Egypt, Libya, Algeria and Sudan. However, many analysts have argued that the underlying failure is the state’s lack of inclusiveness and its failure to fulfil its basic functions of providing a decent life for its citizens. The salience and politicisation of religious identity was seen by some as an outcome of the ‘failure of modernity’, which resulted in uprooting large groups without delivering any compensating benefits (Ellingsen, 2005: 307). Conflicts that look like ‘religious’ rebellions against the domineering ‘secular’ state, or reactions against the imposition of religious hegemony, are in fact linked to the failure of the state to address concerns regarding inequality and lack of fair representation of disadvantaged groups in national institutions (Haynes, 2007: 308-9).

In the recent past, Kenya has witnessed a wave of terrorist attacks that have been perpetrated by people believed to have links with the terror group al-Shabaab. Some of these groups have indiscriminately attacked churches and eating joints, killing many innocent people. To forestall such attacks, security apparatuses often respond to such attacks by hunting down and raiding hubs believed to be training ground for mostly Islamic extremism especially in coast region and Nairobi. The Masjid Musa Mosque raid is a classic example of police reaction and action. During the raid, police found literature, flags, riffles and other items believed to have been used for the radicalisation of hundreds of youth who were also arrested. A string of grenade attacks have occurred in various parts of Kenya although most are confined to Garissa, Mombasa and the capital Nairobi. These attacks have intensified since the military incursion into Somalia in October 2011. Granted, youth radicalisation and religious intolerance goes back to the 1998 US embassy attacks in Nairobi and the Tanzanian city of Dar es Salam that killed 220 people. In 2002, a dual car bomb and suicide attack on a hotel and plane in Mombasa led to the arrest of one suspect. Following such attacks and subsequent police reaction, there always follow a spate of riots. For example, the killing of two controversial Muslim clergy believed to be behind the jihadist ideology led to serious riots in Mombasa. Such riots have resulted in the burning of churches and the killing of people thought or suspected to be Christians. The coverage of the Eastleigh Usalama watch operations is illustrative of what sensationalised and sometimes emotive coverage of such issues can do. The scare-mongering as well as profiling of Somali ethnic groups as potential terrorists resulted in some of them being bundled out of public transport and social places.

The constitution and other laws and policies prohibit religious discrimination and protect religious freedom, including the freedom to manifest any religion or belief through worship, practice, teaching, or observance and debate on religious questions. Some Muslims, especially ethnic Somalis, stated their communities were the target of government-directed extrajudicial killings, arbitrary arrest and detention, and deportation, charges the government denied. Security officials briefly closed then reopened four mosques in Mombasa and threatened to close other mosques or madrassahs around the country, stating the mosques were linked to incitement of violent extremism. Muslim leaders and human rights organizations stated “Operation Usalama Watch” unfairly targeted Somali and some other Muslim communities. Kenyans of Somali heritage and Muslim communities reported difficulties obtaining government-mandated identification documents.